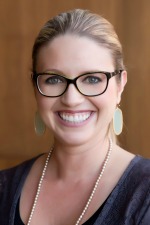 Sam Carlson was born and raised in Austin, Texas. She initially attended Colorado State University in Fort Collins but went on to earn a Bachelor’s of Arts in Journalism at Texas State University in San Marcos. During her time in college, Sam was a member of Alpha Kappa Psi business fraternity and was employed throughout college, including positions at CSU’s Center for Entrepreneurship and Texas State’s Business Marketing Department.

Though being a journalist intrigued her, Sam found herself back at the state’s Capitol City upon graduation. Initially, she worked for a political consultant and lobbyist for the 80th Legislative Session and was bitten by the political bug.

After several years working for Senator Estes, Sam joined the team at JHL Company, where she worked on fundraising and political affairs efforts. She was instrumental in membership recruitment for clients, helping build grassroots enthusiasm and facilitate communications. While at JHL Company, Sam also served as a political affairs consultant; assisting clients navigate their way around the Texas Legislature.

After her time with JHL Company, Sam was hired to work for State Senator Joan Huffman (R-Houston). Sam served as Legislative Director and was responsible for analyzing policy related to several areas, including health and human services, economic development and finance. During her time in the legislature, Sam worked closely with CRNAs in the state of Texas and became well-versed in TxANA’s issues.

Sam joined TxANA in September 2014. In her spare time, Sam enjoys experiencing everything Austin has to offer, usually with her dogs in tow. She is an avid supporter of animal rescue, enthusiastic about fitness and an adventurous foodie.

Andrea was born in Angleton, Texas and was raised across the U.S. before settling back in Texas. She attended Brazosport College, where she received her Associate’s Degree. Then moved on to Texas State University, where she went on to earn her Bachelor of Arts Degree in Political Science. Andrea has always had a very strong interest in politics. Which is why after college, she began working at the Texas Capitol for the 84th Legislature as their Senate Agenda Clerk.

In June 2015, Andrea joined the TxANA team. Andrea enjoys taking in all of Austin’s various outdoor activities with her dog. As well as catching a movie, reading a book, or finding a new restaurant to try.