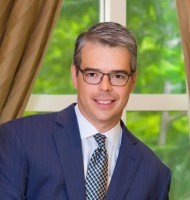 The Texas Association of Nurse Anesthetists (TxANA) is launching a new series, the Faces of TxANA, an opportunity to learn more about the work of Certified Registered Nurse Anesthetists (CRNAs) and how CRNAs positively contribute to our state’s healthcare sector. For our inaugural post, meet Dr. Dru Riddle.

We caught up with Dr. Dru Riddle, TxANA President-Elect and Assistant Professor at Texas Christian University's (TCU) School of Nurse Anesthesia to talk about his start in the field of anesthesia, why he chose his career path and what inspires and motivates him, both in the workplace and at home.

When you speak with Dr. Riddle it’s easy to notice the passion he has for the science of anesthesia and the CRNA profession. His enthusiasm has led to an impressive list of accomplishments within the anesthesia and CRNA community. Dru’s expertise includes published works on a wide range of topics, including pharmacogenomics, evidence-based practice, and health policy as it relates to anesthesia.

Where it All Began
Like many CRNAs, Dru's path toward becoming a CRNA began by observing the skill of CRNA teachers. "I was an undergraduate in college and a paramedic,” Riddle says. “During this time, I interacted with a CRNA to learn to intubate. It took watching him for one case and I knew this was the career for me. The rest of the day I peppered him with questions on what a CRNA was and how to become one. By the next week I had applied to the nursing program.” Dru's first stop along his path to entering the CRNA profession was at Virginia Commonwealth University, where he achieved his Bachelor of Science in Nursing. From there, Dru continued his education at Old Dominion University, receiving a Master of Science in Nursing. His next stop ended up being the place that he now calls home, Fort Worth, where he obtained his Doctorate of Nursing Practice from Texas Christian University. With Dru's thirst for learning still strong, he returned a final time to college, this time at the Medical University of South Carolina, where he obtained his PhD.

Dru now teaches full-time at TCU, educating the next generation of CRNAs and pushing them to take the profession to new and exciting heights. Despite his busy schedule as a full-time educator, Dru continues to give back to the profession by staying active in the Texas Association of Nurse Anesthetists (TxANA). Dru has served as a TxANA Director (2014-2016), Vice President (2016-2017) and most recently as President-Elect (2017-2018).

Family Matters
Dru lives with his wife and daughter in Fort Worth and has a passion for cooking. If fact, when asked what career he would have chosen if not that of a CRNA, he states without hesitation he’d be a chef. Dru is active in his church and routinely attends mission trips with his family. "We try to go on at least one mission trip a year," Dru shared. "If we miss a year, we will do two the next year.”

Patients First
When asked if he had one message to the CRNAs of Texas, Dru's response is exactly what you would expect from a man who has spent his life passionately supporting the causes and career he believes in.

Dr. Riddle said, "Our focus should always be on providing the best possible anesthetic care at all times. Despite every other battle we fight, our patients must always come first. We keep our focus there, and we can face any challenge."