One Year Later: A Look Back at the Hurricane Harvey Ride-Out 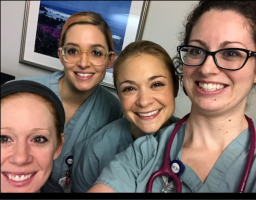 Source: One Year Later: A Look Back at the Hurricane Harvey Ride-Out
Date: September 12, 2018

The Texas Medical Center is the largest life sciences destination in the world.  A stunning 106,000 employees work at 54 various institutions, including eight academic and research institutions and 21 hospitals located throughout the center.  Over 160,000 patients and volunteers visit the Texas Medical Center (TMC) on a daily basis.  According to Houston First Corporation, this equates to a whopping 7.2 million visitors per year to the center.

The effects of Hurricane Harvey dramatically impacted the abilities of patients and medical workers to get in and out of the TMC.  Air and water rescue efforts were necessary to get patients with medically emergent conditions to hospitals for needed care.  Many TMC employees were unable to leave the center and subsequently remained in-house to care for patients until relief teams could safely make their way in to replace them.

Many nurse anesthetists were part of hurricane “ride out” teams in and around the Houston area before, during, and after Harvey's wrath.

Some of the many CRNAs who tirelessly and selflessly worked around the clock at Texas Children’s Hospital in grueling shifts, many lasting more than 24 hours, were Meg Duggan, Kimmi Hunter, Laura Oates, Kristen Sheehy, Jing Jing Sparrow, and Katie Springer (pictured below). Not only did the CRNAs come through at the hospital, but some volunteered at shelters, donated money or items to those in need, helped family and coworkers with flooded homes, and opened their doors to friends, family members, and flood evacuees.

This is only a small sample of the good done by Texas CRNAs during Hurricane Harvey. Long after homes are rebuilt, flood debris is cleared, and life returns to normal, the Texas CRNA community will remain vigilant, ready to help when disaster strikes again.